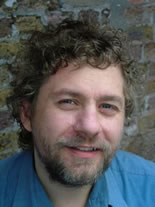 The man who brought Doctor Who’s most famous foe back to the small screen is the new writer-in-residence on the MA Creative Writing course at Edinburgh Napier University.

Robert Shearman, who memorably reintroduced the Daleks to the BAFTA-winning 2005 series of Doctor Who, will take up his post in September 2011. The multi-award winning fantasy writer will provide advice to students on the University’s groundbreaking MA in Creative Writing course as part of the role, which was previously held by Scottish novelist James Robertson.


His ‘Dalek’ episode for the hit BBC sci-fi show – which gave the intergalactic despots the power of flight – was nominated for a Hugo Award, while he has also made award-winning contributions to the Doctor Who audio range. Shearman has successfully worked as a writer for television, radio and the stage, and was formerly the resident writer at the Northcott Theatre in Exeter. His third collection, Everyone’s Just So So Special, was launched in August 2011, and he will be working on his debut novel while in post at the University.

The London-based writer, who will spend an average of two days a week at the University, has published two acclaimed collections of short stories, Tiny Deaths (2007), winner of the World Fantasy Award for Best Collection, and Love Songs for the Shy and Cynical (2009), winner of the British Fantasy Award.


Edinburgh Napier’s MA in Creative Writing course embraces science fiction, fantasy, horror and crime writing and was the first in the UK to offer a specialist module in writing for graphic fiction. It also eschews traditional workshop-based teaching for one-to-one mentoring and has piloted a unique reader-in-residence post.


Mr Shearman said: “One of the hardest parts about writing is the isolation. The sense of 'so what?' that creeps over you every time you stare, alone, at a blank computer screen. What the students at Edinburgh Napier are offered is a sense of community, an answer to that 'so whattery’.


"I'm just as plagued by that as anyone else, and whilst my post as resident writer will mean I can encourage fellow writers, I can't wait in turn to be encouraged by them, to find a new context to my prose and scriptwriting, and to bounce off their enthusiasm. I feel enormously honoured to be attached to such a wonderful course.”


Programme Leader Sam Kelly said: “We’re incredibly excited to have Rob joining us as writer-in-residence. We’re firm fans of his work, and his love of genre fiction, enthusiasm for experiments and professional success across a whole range of narrative forms make him the perfect match for our unique course. With the influence of his boundless creative energy, this is definitely going to be a memorable year for us and our students.”


The writer-in-residence post at Edinburgh Napier was created in 2010 after funding from The Binks Trust and is a 12-month appointment.
Posted by DAVID BISHOP at 12:28 PM