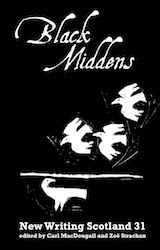 Two Edinburgh Napier MA Creative Writing alumni are being published in the prestigious annual anthology New Writing Scotland, which has helped nurture numerous notable writers over the years. Volume 31 features Mark Nicholls' A Disquisition on Inadequacy Among the Salaried Classes, while Rosa MacPherson has contributed a story called The Bleed.

Rosa's story started life as an end of trimester submission for the module Narrative Practice. This challenges students to write a short story inspired by one of three supplied plotlines - a Shakespeare play, a myth, or the lyrics of a murder ballad. Last year the same assessment led to Ever Dundas having her story Pure published in New Writing Scotland 30.

Former writer in residence Robert Shearman is a nominee for best collection in the British Fantasy Awards 2013. Remember Why You Fear Me [ChiZine Publications] is up against collections by Thana Niveau, Joel Lane, and Jonathan Carroll. The winner will be announced at the World Fantasy Convention at Brighton in November - congratulations, Rob.

Much sadder news was the recent death of acclaimed Scottish writer Iain (M) Bank, a great friend of current writer in residence Ken MacLeod. Iain gave his final interview to our reader in residence, Stuart Kelly. It's a wonderful article and worth seeking out (read it here). Rest in peace, Iain.
Posted by DAVID BISHOP at 1:33 PM