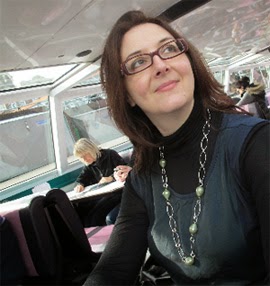 Hearty congratulations to Catherine Simpson, a recent graduate of Edinburgh Napier University's MA in Creative Writing, who has just been signed up by London agent Joanna Swainson from Hardman & Swainson.

This is the culmination of several years of effort and endeavour by Catherine, a former part-time student. Her recent achievements include performing at the Winter Words Festival in Pitlochry and the Edinburgh International Book Festival [twice!], receiving a New Writers Award for Fiction from the Scottish Book Trust and being a finalist for the Mslexia Women's Novel Competition.

The creative work that helped Catherine secure representation was Truestory, a novel developed through mentoring on the MA programme with the first chapters written as her major project.We've got our fingers crossed her novel finds a publisher so we can read the rest of it!

Last month we celebrated recent graduate Mark Harding having a story published in the prestigious annual anthology New Writing Scotland. Turns out he's not the only former student from our programme to have work in NWS 32, which is published this month.

Ever Dundas has a story called Wire in the anthology, first developed via mentoring on the MA. It's her second appearance in NWS, having had a story called Pure [also originated on the course] in the 2012 anthology.

We look forward to seeing what all of our graduates write next...
Posted by DAVID BISHOP at 4:32 PM