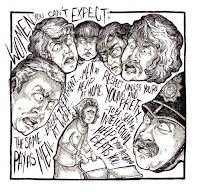 Lesley devised the narrative while studying for her MA at Edinburgh Napier University and its was the creative capstone of her time on the programme. She has continued to develop it, collaborating with artist Heather Charters on their entry for Myriad.

'I am ecstatic our project has been longlisted in the Myriad First Graphic Novel Competition,' Lesley wrote on Twitter, praising 'mega talented' artist Heather Charters. 'Keep everything crossed we make the shortlist.'

This Woman's Work is a documentary comic designed to inspire action and drive change in furthering gender equality. It examines how the workplace was not designed for women, and how women’s lives have been affected by that. [There's a full page from the project further down this blogpost.]

The graphic novel competition offers the winner(s) an opportunity to have their completed work  published by Myriad Editions. It's a unique opportunity for creators to see their debut graphic novel in print, furthering Myriad’s mission to encourage and nurture new talent.

Myriad has published the graphic novels submitted by first two competitions winners - Gareth Brookes (2012) and Jade Sarson (2014), with the 2018 winner Jenny Robins due to have her graphic novel published next year. Myriad has also published four  shortlisted authors from past years, as well as work by other creators who entered the competition.

The shortlist is due to be announced by the end of this month. We'll be keeping everything crossed for Lesley and Heather, but making the longlist is a massive achievement whatever happens!