We're always delighted to see graduates from our Creative Writing MA getting noticed, and this month has already brought a trinity of success stories from alumni of the programme, spanning page and stage. 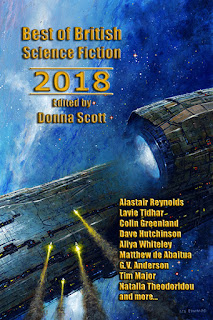 Anna Ibbotson's short story Do No Harm has been selected for the Best of British Science Fiction 2018 anthology being published next month by Newcon Press. Her work will be rubbing shoulders with stories by acclaimed and best-selling SF authors such as Alistair Reynolds, Aliya Whiteley and Lavie Tidhar.

Anna's story was first published in Shoreline of Infinity issue 11, but was originally written for an assessment on the MA. 'It was written as part of the genre fiction module,' Anna recalled on Twitter last week, 'and the feedback as part of that made it infinitely stronger!'

Crime fiction is another area when alumni have been making their mark. Each May the Crime Writers' Association announces longlists for its prestigious Dagger Awards at Crimefest in Bristol, and this year's longlists include a graduate of Edinburgh Napier's programme.

Mairi Campbell-Jack is one of ten writers longlisted for the 2019 Debut Dagger, for the opening of a crime novel by an author without a traditional publishing contract. Her book is the wittily entitled Self-Help for Serial Killers: Let Your Creativity Bloom.

She says completing the MA was an important step on her writing journey: 'I used so much of the learning in writing the synopsis and constructing the plot, used a character from my major project and more.' The Dagger Award shortlists are announced in the summer, we'll keep our fingers crossed.

But graduate success is not always on the page. This week the celebrated A Play, A Pie and A Pint theatre season at Oran Mor in Glasgow features a revival of Jocky Wilson Said, a play written by MA Creative Writing graduate Jane Livingstone and her sibling Jonathan Cairney.

The one-man play celebrates legendary Scottish darts champion Jocky Wilson, brought back to life on stage by Outlander actor Grant O'Rourke. The play is one of three Jane has written for A Play, A Pie and A Pint, but her successes haven't stopped there.

She is among the writers chosen for the Scottish Voices development drama group by the BBC writersroom. She had two scripts optioned last year, and another play commissioned, all while being a director of the Outwith Festival in Dunfermline.

Massive congratulations to all three of these alumni!
Posted by DAVID BISHOP at 11:41 AM