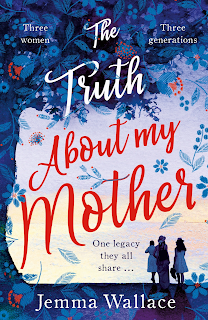 This month sees the launch of The Truth About My Mother, the debut novel by Edinburgh Napier University MA Creative Writing alumni Jemma Wallace. Publisher Trapeze Books describes it as 'a sweeping family drama about secrets, sacrifice and love, spanning from the 1950s to present day.'

Two years ago Jemma won the ‘One in Four’ competition for a new writer with single parent background, securing a £10,000 contract in the process. Now her debut novel is being published on February 20th, with a special launch event at Blackwells in Edinburgh on Thursday February 25th.

The Truth About My Mother was inspired in part by Jemma's experience of single parenthood and her grandmothers experience of being a single mother in the 1950s. Here's the official blurb for it:


All families have secrets, don’t they?
89-year-old Jeannette never meant to keep the truth from her family. But when a near fatal fall sends her to live with her granddaughter Amy, she finds herself revisiting a past that’s been hidden for too many years.
Amy, however, has always been good at keeping secrets. When ex-partner Nick shows up, she’s forced to admit that some things just can’t stay hidden forever.
Judith is starting from scratch – again. The master of reinvention, Amy’s mother has been seeking happiness in all the wrong places. This time though, she might just find it a lot closer to home than she ever believed she would…
As Jeannette’s 90th birthday party approaches, all three women discover they have more in common than they first thought, and the secrets from the past may be the key to unlocking the future.
Three women. Three generations. One legacy...

Two more of our alumni have books coming out soon. British Fantasy Award-winning author Georgina Bruce has written a new horror novella called Honeybones, which is being published by TTA Press, home of acclaimed fiction monthlies Interzone and Black Static.

Honeybones is the second tome from this writer, following her short story collection This House of Wounds, which was unleashed by Undertow to considerable acclaim last summer.

Across the Atlantic publisher Little, Brown is preparing to launch the sixth book by another of our MA Creative Writing graduates, Katrina Leno.

Horrid is being described as 'a haunting contemporary horror novel that explores themes of mental illness, rage, and grief, twisted with spine-chilling elements of Stephen King and Agatha Christie.' Here's the full blurb for this September 2020 title:

Following her father's death, Jane North-Robinson and her mom move from sunny California to the dreary, dilapidated old house in Maine where her mother grew up. All they want is a fresh start, but behind North Manor's doors lurks a history that leaves them feeling more alone...and more tormented.

As the cold New England autumn arrives, and Jane settles in to her new home, she finds solace in old books and memories of her dad. She steadily begins making new friends, but also faces bullying from the resident "bad seed," struggling to tamp down her own worst nature in response. Jane's mom also seems to be spiraling with the return of her childhood home, but she won't reveal why. Then Jane discovers that the "storage room" her mom has kept locked isn't for storage at all--it's a little girl's bedroom, left untouched for years and not quite as empty of inhabitants as it appears....

Is it grief? Mental illness? Or something more...horrid?